On August 4, 2016, the Carter Center and LiCORMH represented by Dr. Janice L. Cooper, PhD along with other hard working partners presented a petition at a Public Hearing before the National Legislature on the fostering of the Mental Health Act. With the Hearing being well attended and with the inquisitions it requires, below are some of the issues addressed by the delegates before the 53rd Legislature.

With a population of about four million, Liberia is estimated to have over 400,000 people with some form of mental disorders and about 130,000 may suffer from severe mental illnesses such as schizophrenia, bipolar disorder and post-traumatic stress disorder (PTSD). in the article, ("Liberia Plans to Strengthen Mental Health"), health experts estimate that the number of persons suffering from mental illness in Liberia could be even higher.

Various multicounty epidemiological studies point to high rates of major depression at 40%, exposure to sexual violence is estimated at 42%–73%, post-traumatic stress disorder 44%, and high rates of substance abuse to be 12% & 44% among female and male ex-combatants respectively. Despite the high prevalence of psychiatric illnesses, individuals often face multiple barriers to accessing appropriate psychiatric care including lack of human resources, minimal access to psychotropic medications, and lack of culturally appropriate interventions or treatment settings.

In fact, there is only one psychiatrist to serve the whole population. Additionally, lack of perceived need for treatment, the view that mental illness is a result of personal weakness, and stigma are also significant barriers to detection and treatment of mental illnesses "Stories from The Field Psychiatry in Liberia,").

Some of the key findings of the National Mental Health Survey and other studies are as followed:

With the proposed Mental Health Act, we hope that all the stakeholders can take immediate action of passing this law to prevent another generation, service users who are equally Liberians and their families from being left alone to face this huge burden of human misery, disability, poverty and economic loss, with little or no help and support.

The key issues addressed in the Mental Health Act are as follows:

Engaging With Journalist in Liberia to Report More Accurately 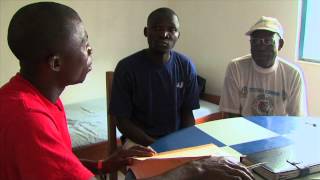